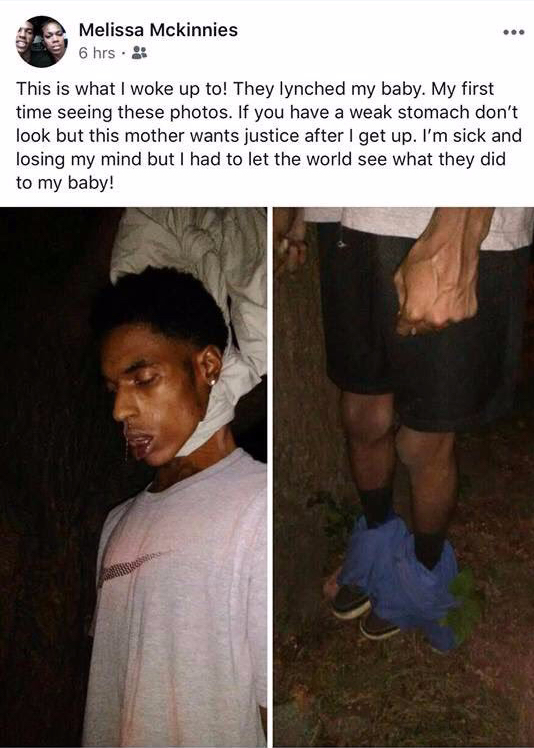 Facebook post of former Ferguson protester, Melissa Mckinnies, showing the image of the lynching of her son, Danye Jones.

The above pictures, from a social media post, of a young black man hanging, have caused an anger to well up from deep within me.  Whether or not he died at the actual hands of others or committed suicide as it is being investigated, I still fault white America for his death; his blood is on your hands. Besides being graphic, these types of pictures disgust me on a whole ‘nother level.  I am sickened and appalled by the history of racial violence in America at the hands of whites, but not only the violence but the gall of this country to refuse to make amends for the wrongs, the atrocities committed and to even disavow its complicity in slavery, genocide, and violation of human rights. I can do nothing but continue to write with a righteous indignation that pales in comparison even to the ignominy, dehumanization, and mutilation of the thousands of black and brown bodies.

I continue to wonder how many little white children have been searching their grandparents’ attics or basements and stumbled upon the genitals, fingers, or ears of a black man or woman floating in a formaldehyde solution in a mason jar.  How many have come across the thousands of the picture postcards and newspaper articles of spectacle lynchings in family photo albums or scrapbooks? When are whites going to stop asking the victims of the most heinous crimes ever committed, “what can we do?” or stop saying “just move on.”

We want to move on but everything in this society is a stark reminder of the subjugation of black and brown people to unimaginable horrors, only meant for novels and movies. America has to move beyond an apology. The word “apology” comes from the Greek word “apologia,” meaning a speech in defense of something.  We have become accustomed to America defending its way of life, be it good for the few and bad for the masses, but always on the defensive.  America, we do not want an apology, we, the marginalized and the oppressed, are waiting for repentance and a sincere plea for forgiveness. Then and only then is when we can begin to move towards making things right. The only problem with this premise is that white America has never been willing to admit complicity in any wrongdoing in history.  It has become apparent that truth and integrity have never been as foundational as white citizens of this country would have you believe. Throughout the history of this nation, people of color have been and continue to be victims of exploitation and colonization of white Europeans, sometimes even in the name of religion. The indigenous people of this land were considered unworthy of this prime real estate and was forced to relinquish their holdings and be submitted to genocide and exile. Racial reconciliation is a myth and those words should never be uttered until white America is brave enough to admit it has done wrong. Reconciliation means to “restore friendly relations with.” Whites have never had friendly relations with those other than whites.  The coexistence of others has only been allowed if it benefits the white man. Even the very nature of the relationship between white men and white women appears to be only if it serves the wants and needs of the advancement of white men, even at the sacrifice of the personhood or the humanity of the white woman. Michelle Ruiz writes in a recent Vogue article that a CNN poll indicated that seventy-five percent or three-quarters of white women voters voted for Georgia’s Republican gubernatorial candidate, Brian Kemp in the 2018 midterm elections. The title of the article summarizes it best: The White Women Voter Problem: Why Do Women Keep Voting for the GOP and Against Their Own Interests? This comes on the heels of white women co-opting Tarana Burke’s #metoo movement and turning it into a series of music festivals, labeled as protests.

I am currently re-reading a classic work of the late theologian James Cone, The Cross and the Lynching Tree.  James Cone accurately recounts the ugly American history, while highlighting its connection to the present. James Cone’s book makes the link between the cross of crucifixion, a Roman instrument of torture and execution in biblical times and the lynching tree and noose in the very recent American history. White America tramples over the blood-soaked soil and distances itself from the lynchings of countless people of color. Blood was spilled long before the lynchings of Jim Crow. Whipping slaves created a compost of skin, sweat, blood, and tears that fertilized the soil of the Americas. Public execution of slaves to enforce colonization or compliance and assimilation into the slave culture.

Just as white religious leaders of their day justified slavery, white religious leaders of today use their pulpits and scripture to justify everything ranging from the mistreatment of women, regardless of color, to the excessive mass incarceration of people of color to a rigged criminal justice system.  This is one of the symptoms of a theology of a colonized faith. The early writers of the canons of scripture, the Bible, we read in Western Christianity were not the same people as the keepers of the scripture. The writers were white European men, while the true guardians of scripture were North African, Middle and Central Asian men and women, the original “Wakandans” of the faith. Wakanda was the magical, mysterious, and hidden nation of African people in Marvel’s Black Panther.  Interestingly the canon of scripture we read today was written centuries, almost two millennia before the discovery of the Qmran Dead Sea Scrolls in the mid-20th century.  The scrolls contained canon and non-canonized scripture confirming a much richer, a much deeper, and much wider story of the relationship of G-d and G-d’s people. How can we talk about G-d having no beginning or end, but we limit the Word of G-d within the confines of the opus we call the Hebrew Bible and the New Testament.  In America, we further limit    G-d’s Word to what works for the sake of the capitalistic hegemony set on ruling the world at any cost.

America’s hatred is deeply embedded within its DNA and has manifested itself in the elevation of someone to the highest office in the country who would do everything in his power to live into the wishes and desires of Fox News and other conservative talking heads to distort the truth and spread fear. Lies and fear have been used to enslave and imprison the minds of whites to do and say whatever it takes to perpetuate the oppression and marginalization of non-white, non-male, non-Christian, non-U.S. born people, to discount and disregard the humanity of the same people. What we need to move forward and create a true covenantal relationship among all of G-d’s creation is for each of us to own up to our $hit, to acknowledge our transgressions against each other and the rest of humanity without making excuses like “my family didn’t own slaves” or “I’m not racist.”  Germany was bold enough to see that the actions of a few were enough to damage not only population located in and around Germany, but in the cancerous affect it would have on all humankind going forward. Germany went above and beyond in ensuring that they would own their $hit. All I am asking is for white America to do the same thing so we can begin the healing process, which is long overdue. Many may consider this “in your face” and confrontational but until white America begins to deal honestly with its problems, I will continue to call it as I see it.